While I've been playing guitar since the age of 10, when my mother first brought home a one-stringed acoustic she purchased for a dollar out of a Marshall Field's display window in downtown Chicago, my guitar playing got a bit more serious at the age of 12.

There was a local music store, called The Village School of Folk Music, and my mother signed me up for lessons. The more advanced students went to a guy named Gary Gand, a 16-year-old local, hotshot guitar player who just happened to be the storeowner’s son. The less advanced students got signed up with Gary’s band mate…are you sitting down…a guy named Paul Hamer. Yes, little known fact but Paul Hamer of Hamer Guitar fame was my first guitar teacher.

These were the hippy days and the days of the British Music Invasion. Hamer was living it all.

I would show up to my guitar lessons; he had hair down to his ass, wore chick clothing and some days, his fingernails would be painted pink. I'm sure if you look at early photos of Jimmy Page, Hamer was just emulating. However, my father had recently died, and I know my mother, as liberal as she was, found herself as a single mother having reservations about exposing her 12 year-old to a dude like this. Rock was new; the dress code was new, hair and all. Hamer and Gand actually got thrown out of high school for the length of their hair and the way they dressed.

Gand cut his hair, cleaned up a bit and went back to school. However, another little known fact, Paul Hamer Sr., a Chicago attorney sued the school district for violating his kids civil rights and it became a landmark case for how we all have the freedom to dress how we like in public schools today.

The guitar lessons pretty much involved listening to songs off albums, mostly guitar licks and lead solos. Hamer would learn them and teach them to me. Rock was new and we were discovering new artists every lesson. However, two artists surfaced for me as the cream of the crop…players I wanted to emulate. Kim Simmonds of Savoy Brown and Johnny Winter. White guys with Chicago Blues rooted in their playing. I spent all my waking moments trying to sound like these two guys. Spent many hours listing to Savoy Brown’s “Blue Matter.” I needed to learn every lick on It Hurts Me Too, all nine minutes of Louisiana Blues, and the intro to May Be Wrong...

There will be more in future blogs about Paul Hamer as we both became the local guitar makers that made good. I even supplied parts…made fingerboards for Hamer Guitars in the early years. 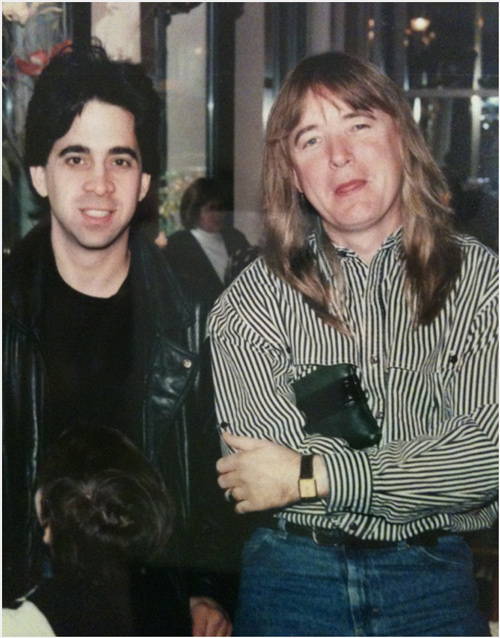 "Becoming a guitar maker, I got a chance to meet and even work with many of my early guitar playing idols - one being Kim Simmonds."

As members of Kim's band went on to become Foghat, he remained true to Savoy Brown and still tours today. I became friends with Kim over the years and he truly is one of the finest, most genuine people I have ever met. I am honored to call him my friend. Another little known fact, when Cream first toured America, they backed up Savoy Brown...

Kim still tours, studies Jazz Guitar and has become a real artist…the painting type. When he is not on the road, he creates some magnificent paintings. I hope to own one someday soon.

KIM SIMMONDS ON THE TAGLIARE CUSTOM

SAVOY BROWN: IT HURTS ME TOO